The Public Cannabis Company Revenue Tracker, managed by New Cannabis Ventures, ranks the top revenue producing cannabis stocks that generate industry sales of more than US$2.5 million per quarter. This data-driven, fact-based tracker will continually update based on new filings so that readers can stay up to date. Companies must file with the SEC or SEDAR to be considered for inclusion.

35 companies currently qualify for inclusion, with 21 filing in U.S dollars and 14 in the Canadian currency. Since our last report, we added Curaleaf (CSE: CURA) (OTC: LDVTF), Halo Labs (NEX: HALO) (OTC: AGEEF), Harvest Health & Recreation (CSE: HARV), Helix TCS (OTC: HLIX), Medicine Man Technologies (OTC: MDCL), Newstrike Brands (TSXV: HIP) (OTC: NWKRF) and Surna (OTC: SRNA). We note that Elixinol Global (ASX: EXL) (OTC: ELLXF) can’t be included at this time despite its likely qualification, as the company’s Q3 report didn’t break out the sales of CBD. Similarly, the Acreage Holdings (CSE: ACRG) Filing Statement included only year-to-date financials and not a quarterly number for revenue. We expect to be adding several additional companies, including Acreage Holdings, over the balance of 2018 as existing public companies continue to ramp up sales and as others begin to trade publicly. 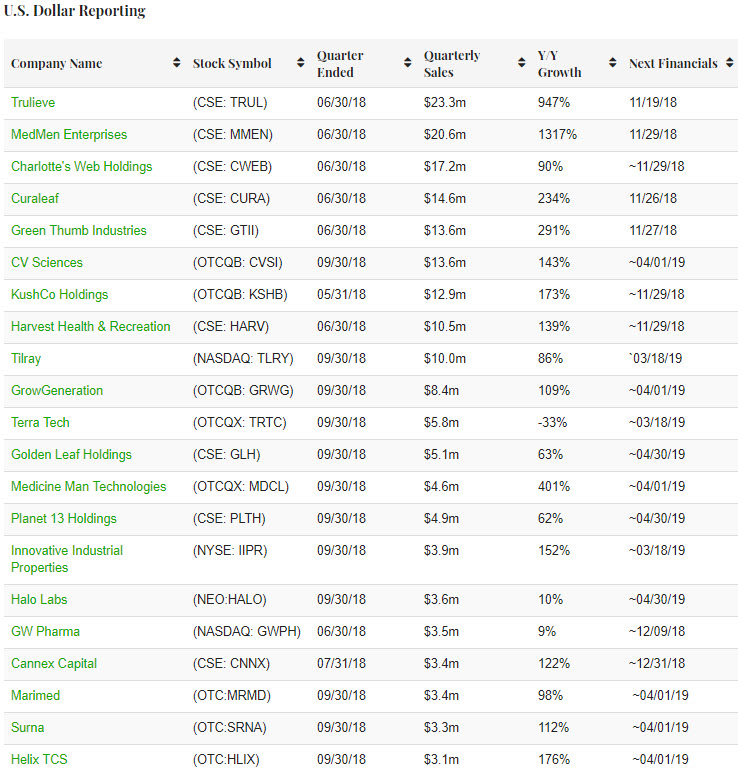 Over the balance of November, we will get reports from seven companies, including KushCo Holdings (OTC: KSHB), which pre-announced its Q4 sales at about $19 million in September, which would represent 120% growth from year-ago sales, is expected to file by the end of November, along with six others, including Charlotte’s Web (CSE: CWEB) (OTC: CWBHF), Curaleaf, Green Thumb Industries (CSE: GTII) (OTC: GTBIF), Harvest Health & Recreation, MedMen Enterprises (CSE: MMEN) (OTC: MMNFF) and Trulieve (CSE: TRUL) (OTC: TCNNF), each of which will file quarterly reports. These six companies reported a combined $99.8 million revenue in the June quarter, all with growth rates in excess of 90%. Several have already scheduled conference calls to discuss the quarterly results.

Visit the Public Cannabis Company Revenue Tracker to track and explore the complete list of qualifying companies.
Before this cannabis stock news is here, it’s published to subscribers on 420 Investor.
Exclusive article by Alan Brochstein, CFA

Based in Houston, Alan leverages his experience as founder of online communities 420 Investor, the first and still largest due diligence platform focused on the publicly-traded stocks in the cannabis industry. With his extensive network in the cannabis community, Alan continues to find new ways to connect the industry and facilitate its sustainable growth. At New Cannabis Ventures, he is responsible for content development and strategic alliances. Before shifting his focus to the cannabis industry in early 2013, Alan, who began his career on Wall Street in 1986, worked as an independent research analyst following over two decades in research and portfolio management. A prolific writer, with over 650 articles published since 2007 at Seeking Alpha, where he has 70,000 followers, Alan is a frequent speaker at industry conferences and a frequent source to the media, including the NY Times, the Wall Street Journal, Fox Business, and Bloomberg TV. Contact Alan: Twitter | Facebook | LinkedIn | Email