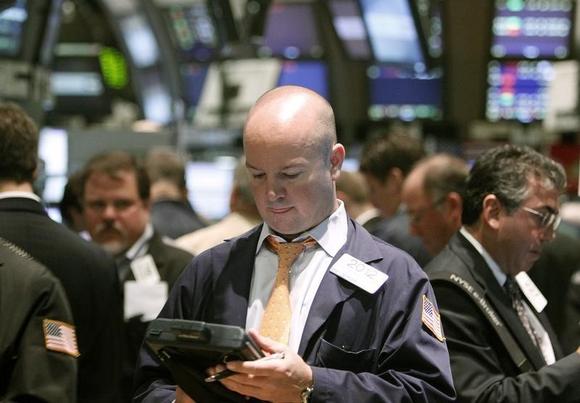 (Reuters) – U.S. stocks rose on Wednesday, boosted by earnings including Apple and Boeing, while focus could shift later in the day to the Federal Reserve’s first two-day policy meeting of the year.

The Fed is expected to signal it remains on track to begin raising interest rates later this year, as it shows confidence that low inflation and rising risks from abroad have yet to derail the U.S. economic recovery.

The Nasdaq Composite jumped, powered by a 7.9 percent advance in Apple shares (AAPL.O) to $117.75. Apple smashed Wall Street expectations with record sales of big-screen iPhones in the holiday shopping season, which helped the company post the largest quarterly profit in corporate history.

“The move today is earnings-related. For Boeing, airlines are doing very well and will probably continue to do so if energy prices remain low,” said King Lip, chief investment officer at Baker Avenue Asset Management in San Francisco.

“Apple is just amazing. As long as they continue to make good products, people will keep buying them, and they have incredible pricing power.”

AT&T (T.N) added 1.7 percent to $33.37 the day after posting a quarterly net loss that was slightly slimmer than Wall Street expected, as its mobile device deals attracted more customers.

Yahoo (YHOO.O) gained 2.2 percent to $49.04 after it unveiled plans to spin off its 15 percent stake in Alibaba Group Holding (BABA.N), responding to pressure to hand over to shareholders its e-commerce investment valued at roughly $40 billion.

But Alibaba shares fell 3.2 percent to $99.66 after a Chinese regulator accused the e-commerce company of failing to clean up what it called illegal business deals on its platforms.

U.S. Steel Corp’s shares (X.N) added 8.4 percent to $23.06 the day after its profit beat expectations. The company warned that low oil prices and the strong U.S. dollar could negatively impact its business in 2015, but said potential higher consumer spending could help lift demand.