Are Stocks Disconnected From the Economy?

Many may be wondering about the apparent disconnect between Wall Street and Main Street. Certainly the current cycle is unique.

The market appears to have bottomed on March 23 (35 market days ago), and is up 31% from the lows (retracing 62% of the decline). But the economic damage continues to mount: Last Friday’s jobs report showed a one-month increase in the unemployment rate from 4.4% to 14.7%. And Q2 2020 earnings are now expected to fall 42% from a year ago. Earnings are on track to fall 21% for the fiscal year.

Stock prices are up though earnings estimates are down

But given the uncertainty of the speed and shape of the economy’s re-opening, and how much the market has already rallied, it’s certainly logical to ask whether investors have priced in too much of a recovery.

Are stock prices reflecting too much optimism?

The chart below tries to answer that question. Here I show the drawdown and subsequent recovery in the S&P 500 (SPX) price index, overlaid against the drawdown in various earnings estimates. Those include fiscal years 2020, 2021, and 2022, as well as the next 12 months (all data from Bloomberg).

The chart clearly illustrates how price has moved well ahead of earnings, in both directions. 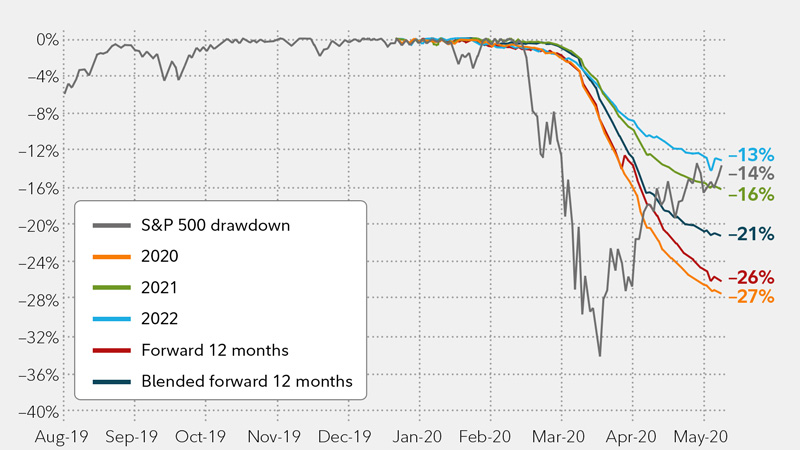 If we just eyeball where the market was trading at the low (2,192 on March 23) versus where it closed last week (2,930), we can conclude that at the low the market was pricing in a bigger earnings hit than has so far materialized (34% decline in price versus a 27% decline in 2020 earnings per share estimates). Now it is pricing in a recovery—but how much of a recovery?

Bottom line: The market has rallied a lot, and if it rallies any more from here it will require either a higher valuation multiple or improving earnings estimates.

The Fed may have helped the stock market avoid the worst-case scenario, at least for now. But at what price? Will all this money printing stoke inflation and debase the dollar?

These concerns are very much reminiscent of the Global Financial Crisis. The gold bugs were out in full force back then, calling for much higher gold prices and pointing out that the gains in the SPX after the March 2009 low were a “money illusion” created by the Fed.

All you had to do was divide the SPX by gold to get an index denominated in “real” money instead of fiat money.

The market recovered as soon as the Fed started printing money, but the magnitude of the recovery was “inflated” by lowering the value of the dollar. In gold terms, the stock market didn’t do as well as it did in nominal terms.

It’s an interesting argument that is hard to argue with intellectually. Yet in 2009, eventually the market did fully recover and then some. It ended up increasing five-fold, far more than the Fed’s balance sheet would suggest.

The bears would make the counterpoint that the Fed’s quantitative easing (QE) and zero interest policy facilitated an era of financial engineering which led to some $5 trillion in share buybacks. It’s certainly a fair point.

Consider Japan: No inflation despite negative rates and monetary stimulus

The other analog is Japan. What can we learn about the Japanese experiment with negative rates and debt monetization?¹ It’s an important question, because demographically the U.S. is about 15 years behind Japan.

What strikes me is how a massive increase in BoJ money printing (to 104% of GDP) has not created any inflation. The monetary base has grown from 17% of GDP to 94% of GDP and the five-year inflation rate is zero. Zero! It tells me that the two-headed monster of debt and demographics is likely deflationary, no matter how much money printing is going on.

Like the BoJ, the Fed has undertaken a massive QE program. And negative U.S. yields may not be out of the question. This was highlighted last week when the June 2021 fed funds contract traded above par, which is a fancy way of saying that it’s pricing in a slight negative policy rate. If that’s not Japan-like, I don’t know what is.

Bottom line: The U.S. is not Japan, culturally nor economically. But demographically the similarities are striking, with Japan 15 years ahead of the U.S. If the U.S. is going down a Japan-style modern monetary theory² (MMT) path, the first reaction might be to expect runaway inflation as the Fed prints money to monetize the debt, and in the process debases the dollar. It’s a logical view and it may well happen, but it’s not borne out by the Japanese analog. Something to keep in mind.

1. Government spending in excess of revenues (mostly taxes) creates a deficit typically financed by the Treasury via issuance of government debt instruments. Debt monetization is the financing of governmental operations by the central bank (and not by the Treasury) via its ability to create (“print”) money by, for example, conducting open-market purchases of government bonds. When such bonds come due, the Federal Reserve can return any funds received back to the Treasury; thus in effect, the Treasury may “borrow” money without needing to repay it.

2. Modern Monetary Theory (MMT) is a controversial idea that countries with a sovereign currency (such as the U.S.) are not operationally constrained by debt accumulation because such monopoly issuers can always create (“print”) any monies needed to pay interest on debt (action which critics believe results in inflation or even hyperinflation). A government thus is free under MMT to implement projects or policies aimed at achieving full employment of labor, physical capital, and natural resources. Once an economy reaches full employment, inflation indeed becomes the main theoretical risk; however, MMT proposes that inflation can be controlled via taxes and debt issuance that reduce the money supply. Thus, the theory goes, as long as an economy can supply sufficient labor and capital equipment to meet aggregate demand without encountering excessive inflation, a government can spend without constraint to achieve its social and political goals.

Views expressed are as of the date indicated, based on the information available at that time, and may change based on market or other conditions. Unless otherwise noted, the opinions provided are those of the speaker or author and not necessarily those of Fidelity Investments or its affiliates. Fidelity does not assume any duty to update any of the information.

Investment decisions should be based on an individual’s own goals, time horizon, and tolerance for risk.

Past performance and dividend rates are historical and do not guarantee future results.

Diversification and asset allocation do not ensure a profit or guarantee against loss.

All indexes are unmanaged, and performance of the indexes includes reinvestment of dividends and interest income, unless otherwise noted. Indexes are not illustrative of any particular investment, and it is not possible to invest directly in an index.

Stock markets are volatile and can fluctuate significantly in response to company, industry, political, regulatory, market, or economic developments. Investing in stock involves risks, including the loss of principal.

The S&P 500 ®  Index  is a market capitalization-weighted index of 500 common stocks chosen for market size, liquidity, and industry group representation to represent US equity performance.

Information provided in this document is for informational and educational purposes only. To the extent any investment information in this material is deemed to be a recommendation, it is not meant to be impartial investment advice or advice in a fiduciary capacity and is not intended to be used as a primary basis for you or your client’s investment decisions. Fidelity and its representatives may have a conflict of interest in the products or services mentioned in this material because they have a financial interest in them, and receive compensation, directly or indirectly, in connection with the management, distribution, and/or servicing of these products or services, including Fidelity funds, certain third-party funds and products, and certain investment services.

Before investing have your client consider the funds’, variable investment products, or exchange traded products’ investment objectives, risks, charges, and expenses. Contact Fidelity for a prospectus or a summary prospectus, if available, containing this information. Have your client read it carefully.

TOPICS Stock Prices move before fundamentalsStocks Disconnected from the economy