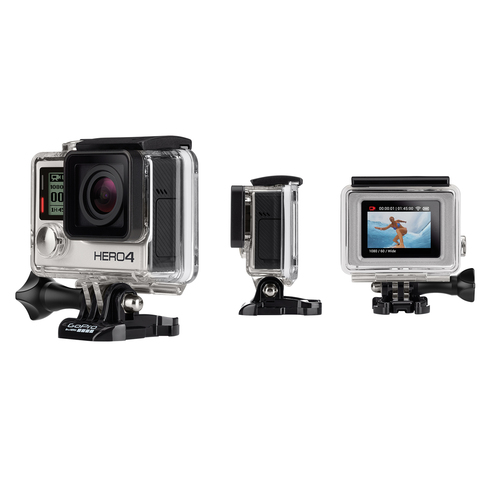 Shares of adventure camera maker and media purveyors GoPro (GPRO) are up $4.92, or 6%, at $87.02, after the company this morning announced its latest camera models, the “Hero4” line, including a “Black” model, which takes 4K video, and the “Silver,” which has a built-in touch screen, starting at $399. The company also offered a simpler model for $129. The new models go on sale later this week.

Shebly Seyrafi of FBN Securities reiterates an Outperform rating on the stock, and raises his price target to $90 from $70, writing that he likes the new pricing of the more-expensive Black model and the entry-level Hero:

Historically, the highest-end model accounted for the majority of revenue, so we expect strong sales of the HERO4 Black. We also think that the introduction of the low-end device will better cater to the masses, so we are raising our unit assumptions accordingly. We are lowering our ASP assumptions only slightly as we expect continued robust sales of the high-end HERO […] GPRO is phasing out the HERO3+ Black Edition with the launch of the new products, but it will continue to sell the HERO3+ Silver (MSRP of $299) and HERO3+ White (MSRP for $199). Therefore, it will have products with $129/$199/$299/$399 price points to better segment the market.

Jeremy David of Citigroup, writing yesterday in anticipation of the unveiling, also noted the pricing moves, remarking that “we believe there would be demand for a HERO4 priced above $400 as price elasticity of demand for the GoPro is low if you are into action sports (the purchase is aspirational) or in the filmmaking business, while a model priced below $200 could expand the TAM and reduce the ability of low-cost action cam OEMs to grab share.”

Although “competitors are launching new models too,” he writes, with Sony (SNE) coming out with an “Action Cam ‘Mini’” for $250 to $350 this month, and Contour offering the “ROAM3” for $200, “GoPro is unlikely to feel much competitive pressure,” in his opinion.

Dougherty & Co.’s Charles Anderson, who has a Buy rating on Ambarella shares, and a $45 price target, today writes in a note to clients that he believes Ambarella “is supplying the video encoding chip on all three devices, pending teardowns.”

Others can supply the chips, but he feels but his “checks” suggest to him its Ambarella.

“We note that AMBA management has suggested there could be products in the near-term that drive unit upside with some GM% dilution (with overall net incremental gross profit dollars). This looks to be it.”

Thus, we believe GoPro’s announcement is very positive. At $129, we’d guess the HERO could perhaps become a $100 Black Friday promotion and drive substantial upside to forecasted unit volume. It’s important to keep in mind that buyers around the holidays are less spec-sheet sensitive as they are buying the product for other people.

Here’s the chart since IPO (click for larger image):

Previous:S 500 Mercedes: 1st Plug-In Hybrid with a Star-VIDEO
Next: How the CRTC is interfering with its own mandate in its Netflix battle