The growth in infused pre-roll sales represents “the most significant growth of any segment within the cannabis industry over the last year or two, given that it is growing very quickly and it is also very large,” said Cooper Ashley, analytics manager with Seattle-based cannabis analytics firm Headset.

Infused pre-rolls serve as “a nice introduction to different forms of cannabis, like concentrates, which are a much smaller piece of the market,” said Adam Coates, chief revenue officer of Decibel Cannabis Co., a market leader in Canada’s infused pre-roll segment. 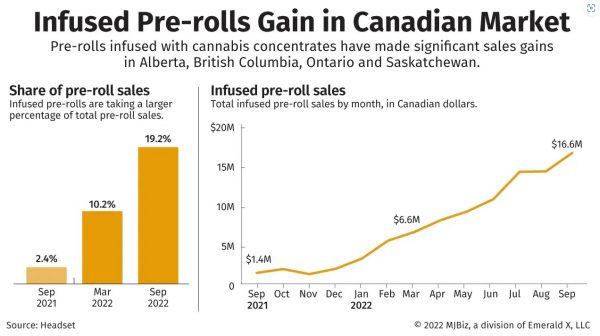 Infused pre-rolls comprised 19.2% of total pre-roll sales in September in the four Canadian markets Headset tracks, up from 2.4% a year earlier

Headset’s Ashley said U.S. market share of infused pre-rolls also has been growing, and Canada appears to be following that trend.

The overall pre-roll category comprises a larger share of Canadian cannabis sales than it does U.S. sales, Ashley said, adding:

“Which indicates that infused pre-rolls could be even more significant to the Canadian cannabis market at large.”

What works in infused pre-rolls

Calgary, Alberta-based Decibel leads the infused pre-roll market in the Canadian provinces tracked by Headset, with its General Admission and Qwest brands occupying the Nos. 1 and 2 spots for infused pre-roll brand sales in Headset’s Canadian markets over the past year.

The pre-roll category as a whole is “growing like crazy in Canada,” according to Decibel’s Coates.

“So the consumer is telling us that they like this format,” he said.

Coates said Decibel launched its infused pre-roll sales in late 2021, after Health Canada clarified to licensed producers that mixing dried marijuana with cannabis extracts results in a product defined as an extract under regulations.

“For example, a pre-rolled joint fortified with kief is a cannabis extract product,” the federal regulator noted in an August 2021 update to cannabis licensees.

Coates said a hash-infused pre-roll was less successful and is being discontinued, despite the popularity of hash in Canada.

While some Canadian cannabis producers use third-party sales agencies, Coates said Decibel has an in-house sales team that works to promote its infused pre-rolls and other products.

“Being able to have really direct conversations with retailers, with budtenders, engage with them to educate around what these products are, and how they’ll work for their customer base, I think has also been really important in terms of the success of our brands in this category,” he said.

The No. 3 infused pre-roll brand in Headset’s four Canadian markets over the past year is Dab Bods, produced by Red Deer, Alberta-based Stigma Grow, a subsidiary of CanadaBis Capital.

CanadaBis CEO Travis McIntyre said Stigma Grow shifted to focus on cannabis extraction and concentrates in light of the commoditization of the marijuana flower market and observed the increasing popularity of concentrates in certain U.S. markets.

He also said the product speaks to key consumer demands.

Combined with a “good price point,” McIntyre said, high THC and terpene content have “really played well to our success so far.”

“These are very challenging products on a number of fronts,” Decibel’s Coates said.

Coates said Decibel did “a tremendous amount of research at the operations level and at our facilities to figure out, how do we produce these things efficiently, consistently and in line with the demand?”

CanadaBis’ McIntyre said Stigma Grow took its time to engineer infused pre-rolls that “burn consistently” and don’t “canoe” – when one side of the joint burns faster than the other.

“Everything we do is still hand-rolled,” McIntyre said.

“There isn’t a machine developed as of yet – we’re working on one, but there isn’t one yet – that will actually do our pre-rolls properly to our quality standards.”

For example, explained Decibel’s Coates, a package of three 0.5-gram infused pre-rolls has a net weight of 1.5 grams.

However, Canada’s cannabis equivalency rules mean the 1.5-gram package is equivalent to six grams of dried cannabis flower, since infused pre-rolls are treated as a cannabis extract.

With consumers limited to possessing 30 grams (or the equivalent) in public, a cannabis shopper can buy only five packs of those infused pre-rolls at once.

CanadaBis’ McIntyre also noted that cannabis extracts such as infused pre-rolls are limited to containing 1,000 milligrams of THC per package, and “we have to work within that boundary.”

Since infused pre-rolls are classified as cannabis extracts by the Canadian government, they are subject to a different excise tax rate than regular pre-rolled joints, based on the total milligrams of THC.

“So your tax burden on these things is pretty intense as well,” he continued.

“To be successful in this category, you have to be really, really efficient in your production, because you can only push the price so much – especially on joints.”

After accounting for the excise tax on infused pre-rolls, said CanadaBis’ McIntyre, margins are lower than for many of the company’s other products.

McIntyre’s advice to producers entering the infused pre-roll space is to identify the end consumer and pay attention to their preferences.

“Build what the customer wants, not what we think is going to sell,” he said.

Solomon Israel can be reached at solomon.israel@mjbizdaily.com.