By Evelyn Cheng29 minutes ago

“The signaling by the Fed yesterday, (that it) doesn’t see confidence to pull the trigger to raise from zero to 25 basis points, I think is negative sentiment that’s hitting the market,” said Art Hogan, chief market strategist at Wunderlich Securities.

“I think they’ve done more harm than good,” he said.

The major averages pared losses after falling more than 1 percent in the open. “We opened down in concert with the rest of the world,” said Mark Luschini, chief investment strategist at Janney Montgomery Scott.

About midway through the local trading session, a “fat finger” incident caused the FTSE 100 index to briefly fall 2 percent before closing down about 1 percent.

“There’s just a lot of uncertainty right now,” said Scott Brown, chief economist at Raymond James, adding that the timing of a Fed rate hike should n’t matter, “but it does for some reason.”

The Dow Jones industrial average traded about 200 points lower. The index lost as much as 283.7 points shortly after the open for the index to fall back into correction territory, or more than 10 percent off its 52-week high.

The S&P 500 and Nasdaq composite remain within 8 percent of their 52-week highs.

The Federal Reserve held its key federal funds rate unchanged after the conclusion of its two-day policy meeting Thursday. September was supposed to be the month the U.S. central bank finally came off its zero interest rate policy, but instead it opted to hold steady for at least one more month.

During a press conference after the announcement, Federal Reserve Chair Janet Yellen stressed the path of the Fed’s first rate hike in nearly a decade is more important than its timing.

“The only sliver of hope, post that announcement she left open the door that they could raise rates at a non-press conference meeting,” Hogan said.

Other analysts thought the Fed should not have raised rates, given the global economic environment. Fed funds futures had indicated only about 20 to 30 percent of a chance the Fed would hike in September.

“The people betting real money never expected the Fed to do anything yesterday,” said Nick Raich, CEO of The Earnings Scout. “Ultimately, the Fed did the right thing by holding.”

He noted there were some who thought “if the Fed did not hike, oh my goodness, what do they know, what’s so bad in the economy that we don’t know.”

Odds have also risen that the Fed will now not hike rates until 2016, and RBS says the markets are currently pricing the first full rate rise for March but odds for December were still above 60 percent.

The central bank added to recent Wall Street concerns about the impact of sluggish global growth. In its statement, the Fed said that “recent global economic and financial developments may restrain economic activity somewhat and are likely to put further downward pressure on inflation in the near term.”

China’s surprise devaluation of the yuan in mid-August raised concerns about further slowdown in the world’s second-largest economy and was a factor behind the recent correction in U.S. stocks.

The Fed “said that the U.S. economy is doing OK but they are concerned the global economic turmoil, weakness in China, could have a negative impact on the U.S. economy,” said Stuart Hoffman, chief economist at PNC. 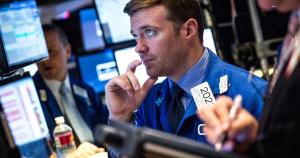 “Clearly they’ve given up on any acceleration in the U.S. economy in the second half of this year compared to the first half this year,” he said.

“It’s certainly this fear factor which might intensify over the next several weeks (with the continued) Fed debate over interest rates,” said Peter Cardillo, chief market economist at Rockwell Global Capital.

No significant earnings were due Friday. On the data front, leading indicators for August rose 0.1 percent, below the expected 0.2 percent gain.

The CBOE Volatility index (VIX) considered the best gauge of fear in the market, traded above 22, up about 6.3 percent.

About two stocks declined for every advancer on the New York Stock Exchange, with an exchange volume of 672 million and a composite volume of about 1.97 billion as of 12:20 p.m.

On tap this week:

Previous:Batteries and Storage Charging Green Transition with $17.4 Billion Influx
Next: How Apple’s First Malware Scare Could Affect You