Wait For the ‘Second Low’ Before Buying Energy Stocks

Should investors be betting in a bottom on energy-sector stocks like ExxonMobil (XOM),Chevron (CVX) and ConocoPhillips (COP)? Not if some recent observations are correct.

Sure, oil seems to have bottomed. But Evercore ISI’s Ed Hyman notes that energy stocks usually lag the recovery in oil prices. He explains: 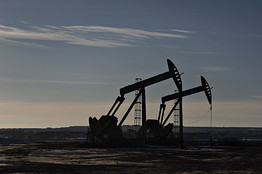 In the Past, Shares of Oil Companies Have Tended to Lag the Lows In Oil – The six previous V-shaped bottoms in oil started out U-shaped and double-bottomed. The bottoms took roughly two months to form. In every case, shares of oil companies bottomed coincident with or after the second low in oil. That is, you could have waited to see the second low in oil before buying the shares.

We are underweight the Energy sector in the US stock markets and the rest of the world. We hold this underweight position because we are not convinced that a bottom has occurred in the oil price. In the scenarios that we envision, we see more downside risk to the price than upside potential. That said, there are some scenarios with a strong upside, but they are event-driven, and the events are not predictable as to time or magnitude.

Barclays’ Thomas Driscoll and team call themselves “less bearish on oil prices” but not energy stocks:

We are less bearish on oil prices than before given the weaker than expected company issued cap-ex guidance and corresponding supply expectations. We now believe US oil volumes will peak in mid-2015 vs. early 2016 as we previously expected. While this is somewhat supportive of oil prices, we remain quite bearish on E&P shares. We believe the stocks discount a price recovery to $80-85/bbl oil, a level that is 30-35% higher than the current 2016 strip. E&P bulls believe the shares are likely to outperform if oil were to recover to $80 while the bears believe the shares already anticipate that type of oil-price recovery.

Previous:Oil market rebounds on US energy report
Next: Netflix Expands Its Portfolio Of Original And Exclusive TV Series With Five New Shows For Kids Of All Ages