Where is Weed Legal?

Posted by SWI Editorial Staff On April 05, 2021 0 Comment
Emily Long
Earlier today, New York Governor Andrew Cuomo signed legislation legalizing recreational cannabis in the Empire state. That brings the number of states where recreational use is permitted to 16; cannabis (as opposed to THC-free CBD) is still wholly illegal in 14 states. Every other state falls somewhere in the middle. Even as Americans grow more divided politically, cannabis continues to gain ground with every election cycle—and even in-between—as public support grows, having reached a high of nearly 70 percent according to a 2020 Gallup poll.
Of course, weed is also still illegal at the federal level. It’s classified as a Schedule I drug under the Controlled Substances Act, putting it in the same category as heroin and other drugs considered to have “no medical use” and a high potential for abuse and dependence. Though efforts are underway to change the classification, for now, state laws simply allow exemptions for certain uses.

Here’s a rundown of where weed is legal for recreational and medical use (and where it isn’t). 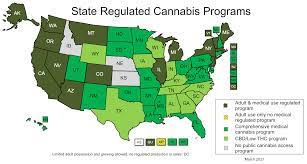 States that legalized weed during and after the November 2020 election

In addition to New York, which legalized cannabis via the legislative process in March 2021, five states had marijuana measures on the ballot in the 2020 election—and all five approved weed by a solid margin, though only one of those is currently offering recreational sales.

States that have legalized recreational marijuana

In 16 states, including 2020 and 2021’s new additions, weed is treated like alcohol—it’s legal for adults (21 and over) to purchase and is regulated and taxed by the government. The specifics of what you can purchase and possess (and where) vary a bit by state. These states also have medical marijuana.

Recreational weed is also legal in Guam and the Northern Mariana Islands.

Areas that have legal weed but no sales

In the District of Columbia, it’s legal to possess and grow limited amounts of weed, but there are no commercial sales outside of medical marijuana from a limited number of licensed dispensaries.

States that have medical cannabis laws

A number of states have legalized medical marijuana but do not allow broader recreational use.

*According to the Marijuana Policy Project, these states have also decriminalized marijuana, reducing or removing jail time for possession of limited amounts of weed.