Self-driving car startup Cruise has just gotten a $2 billion infusion from Microsoft, General Motors, Honda, and institutional investors, according to a joint statement by Cruise, its owner GM, and Microsoft on Tuesday. The investment will bring Cruise’s valuation to $30 billion and make Microsoft an official partner.

Per Tuesday’s announcement: “To unlock the potential of cloud computing for self-driving vehicles, Cruise will leverage Azure, Microsoft’s cloud and edge computing platform, to commercialize its unique autonomous vehicle solutions at scale. Microsoft, as Cruise’s preferred cloud provider, will also tap into Cruise’s deep industry expertise to enhance its customer-driven product innovation and serve transportation companies across the globe through continued investment in Azure.”

So Cruise will get the much-needed funds to conduct research and (possibly discounted) access to Microsoft’s cloud computing resources and move closer to its goal of launching a purpose-built self-driving car.

But in the long run, Microsoft stands to gain more from the deal. Not only will it get two very lucrative customers for its cloud business (Azure will also become GM’s preferred cloud provider, per the announcement), but when seen in the broader context of Microsoft’s self-driving car strategy, “Cruise’s deep industry expertise” will possibly give Microsoft a solid foothold in the future of the still-volatile self-driving car industry.

At a time when most major tech companies are interested in acquiring self-driving car startups or launching their own initiatives, Microsoft’s hands-off approach could eventually turn it into an industry leader.

Self-driving cars can be viewed as a specialized case within AI-driven businesses. Every company running on AI algorithms — namely machine learning — must bring together a few key pieces to have a viable business model:

Microsoft already has a solid AI stack and a full range of products that fit into this category. For instance, the company’s computer vision service runs on machine learning models developed by the company’s engineers. The models were trained using the company’s vast store of image data. As customers use the AI service, they generate more data and labels to further enhance the machine learning models. Finally, Microsoft’s Azure cloud has specialized hardware to both train the models and deliver them at scale and in a cost-efficient manner.

Many companies use Microsoft’s Cognitive Services APIs to integrate AI capabilities into their applications.

Microsoft can also engage in any kind of venture that builds on this AI stack, such as launching its own end-to-end computer vision applications or hosting advanced natural language processing platforms such as OpenAI’s GPT-3.

When it comes to self-driving cars, however, a few new components are added to the mix:

Self-driving cars introduce manufacturing and legal issues that are challenging for companies focused on their software business. There are a few ways companies can overcome these challenges.

The traditional ways to enter an emerging market are to build the technology or buy it from someone else.

In the late 2000s, Google developed its own self-driving car lab, which it later renamed Waymo, to develop AI software and hardware for autonomous driving. Google does not manufacture its own cars and instead relies on the vehicles of other carmakers, such as Toyota, Audi, Fiat Chrysler, and Lexus to test and deploy its technology.

But Google had a head start, which allowed it to create its own self-driving car unit from scratch. Companies that entered the field later made up for their tardiness by acquiring self-driving car startups. Examples include Amazon’s Zoox acquisition and Intel’s acquisition of MobileEye.

Tesla is among the few to have a complete self-driving car stack. The carmaker has autonomous driving technology integrated into its electric vehicles. It also has millions of sold cars that are constantly collecting fresh data to further enhance its algorithms. Apple also has plans to manufacture its own self-driving car, though the full details have yet to emerge.

Microsoft’s approach to the self-driving car industry is different.

“We partner across the industry. We are not in the business of making vehicles or delivering end mobility-as-a-service offerings,” Sanjay Ravi, GM of Automotive Industry at Microsoft, wrote in a 2019 blog post that laid out Microsoft’s automotive strategy.

Why Microsoft’s strategy can succeed

The problem with the self-driving car industry is that we still don’t know when we will get there. Every year, we’re missing new deadlines on having fully autonomous cars on roads. But like the quest for artificial general intelligence, we know that we have a bumpy and potentially long road ahead. 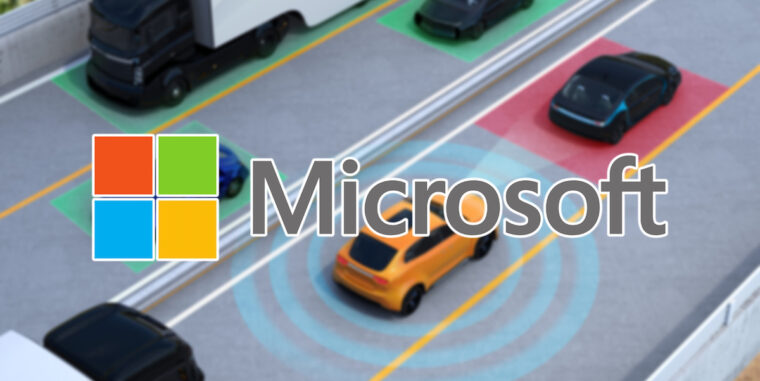 We also don’t know what the final technology will look like. Tesla CEO Elon Musk believes computer vision alone will be enough to reach full autonomy. Other companies are banking on lidar technology becoming more affordable and stable in the future. Car design will also undergo changes as the industry matures.

Every one of these areas can undergo fundamental changes, and those changes will be decisive in determining which startups flourish and which collapse in the coming years. Interestingly, the one thing that will likely remain constant is data, cloud, and software, the three areas where Microsoft already excels.

This is why Microsoft’s strategy of not acquiring startups will protect the company against the industry’s volatility.

Meanwhile, small investments allow Microsoft to cast a wider net and become engaged in a diverse range of solutions through its self-driving startup accelerator program and its partnership agreements. The startups included in Microsoft’s self-driving startup program already represent a diverse set of research areas and directions. Any of them could become a breakthrough solution in the future. While Microsoft supports these startups, it will also tap into their industry expertise and develop its own in-house talent and tools. This will be crucial if and when Microsoft considers making a more serious move to develop self-driving cars.

As the field matures and potential winners become more evident, Microsoft will be in a better position to upgrade its relationship with startups to full partnership and eventual acquisition.

And if Microsoft’s partnership with OpenAI is any indication, a lot of the investment Microsoft makes in startups is in Azure credits, which ensures those startups become locked into Microsoft’s cloud service instead of going with other cloud providers.

On a broader scale, Microsoft’s wide range of partnerships will enable it to become a growing hub to attract self-driving car startups. It will use the expertise and experience of these startups to enhance its cloud and AI services for autonomous driving, and in turn attract more customers.

Many analysts think Microsoft is lagging in the self-driving car space by not having an active program to test cars in cities. I think the company has made a smart move to solidify its position in areas that will remain constant (cloud, data, and algorithms) while developing a strategy that will allow it to adapt to the inevitable changes to the industry in the coming years.

Ben Dickson is a software engineer and the founder of TechTalks. He writes about technology, business, and politics.