Mercedes-Benz EQS is impressive, but calling it a ‘Tesla Killer’ is insane

Mercedes-Benz EQS is impressive, but calling it a ‘Tesla Killer’ is insane

The media and Tesla shorts are quick to call the new Mercedes-Benz EQS a “Tesla killer.”

While the new electric car is impressive, I wouldn’t be so quick to give it the too easily tossed around “Tesla killer” title.

The vehicle impressed with a massive 107.8 kWh battery pack enabling over 400 miles of range and a 200 kW charging capacity.

It is also packed with a ton of luxurious features and technologies.

The EQS is even bringing back the term “Tesla Killer,” which the media and Tesla shorts are already using for the newly unveiled electric sedan. 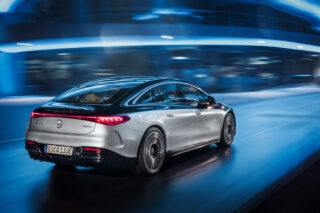 The idea was that Tesla’s lead in electrification would go away once bigger automakers started putting more resources toward making new electric vehicles.Over the years, the use of the term fizzled out as those new “Tesla Killer” EVs came and Tesla kept growing despite them. But now the Mercedes-Benz EQS is bringing the term back to some degree.

I haven’t had the chance to test it yet, but from what I can tell, the Mercedes-Benz EQS is a solid next-gen EV from the German automaker.

The specs are solid and the design forward, but it doesn’t lean toward “weirdmobile,” which has been a problem with several legacy automakers doing electric vehicles in the past.

But calling it a Tesla Killer is just insane, in my opinoin.

Which Tesla vehicle is it killing?

The Tesla Model S is the closest competitor in the California-based automaker’s lineup, and let’s say the EQS completely steals Model S’s market shares, which I obviously don’t think is going to happen, but let’s just look at it for the sake of it.

Last quarter, Tesla achieved record deliveries without the Model S even being in production.

What does that tell you? Tesla doesn’t really need the Model S anymore. Most of Tesla’s business is now coming from the cheaper Model 3 and Model Y vehicles.

That should change a little with the start of production of the refresh Model S and Model X, but those vehicles will still represent only a marginal part of Tesla’s overall business.

Mercedes-Benz didn’t release the price of the EQS yet, and if the rumors are right, it will start at over $100,000.

That means that price-wise, it will only compete with the higher-end versions of the Model S, which starts at $80,000 in the US.

Also, the base EQS is a rear-wheel drive vehicle, while Tesla only sells the Model S with dual motor and tri-motor all-wheel-drive powertrains.

In short, there are some overlaps between the two vehicle programs, but they are not the biggest direct competitor.

The EQS’s own biggest competitor is going to be the S-Class.

Therefore, I think the best thing about the EQS is that it is going to give fans of the brand an opportunity to stay within the brand while going electric.

I’m not saying that it might not convince new people to go electric with Mercedes, but those people are going to be in the market for a super luxury vehicle at over $100,000.

There’s plenty of room for both EVs in the market.

Previous:Bullish On Bitcoin, Bloomberg Predicts $400,000 Price By 2022
Next: Aphria and Tilray cannabis merger moves a step closer to approval