16 million people just got laid off but U.S. stocks had their best week in 45 years 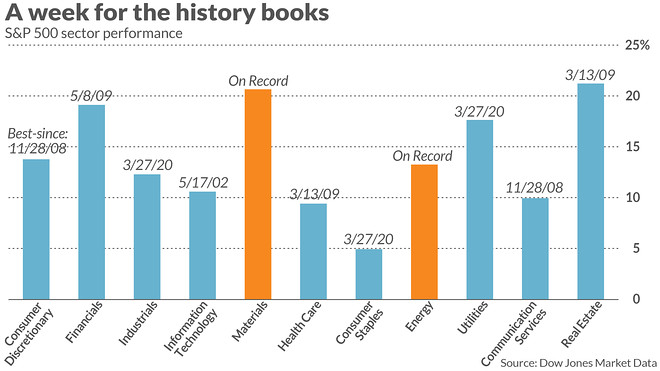 This was the best of weeks, and it was the worst of weeks.

To start with the “worst:” we learned that 6.6 million more people filed for unemployment for the first time, for a three-week tally of more than 16 million and taking the jobless rate up to 10% or more, even as it likely underestimates the number of people who haven’t been able to get through to overburdened state unemployment systems.

In fact, two sectors of the S&P 500 charted their strongest week ever. The chart above shows the sector performances, with data from Dow Jones Market Data. The real estate sector was only launched in 2016; historical data before that is back-tested. All the other sector data dates back to 1989.

First, it’s important to note that many strategists think markets haven’t fully grasped the scope of the devastation the coronavirus will wreak on the economy, let alone the human toll. And for now, the unprecedented actions by the Federal Reserve and other central banks are helping keep investors numb.

“Stocks are up because the damage to the economy — evident in claims — is beyond comprehension, while the response of the Fed is easier to understand,” wrote Chris Low, chief economist for FHN Financial, in a note out Thursday after the jobless claims data.

And most strategists think stocks are likely to take a leg lower from here. Investors haven’t yet had a true “capitulation,” Kim Forrest, founder and CIO of Bokeh Capital Management, told MarketWatch. Analysts at Goldman Sachs agree.

Still, there may be some historical context for understanding what’s going on.

In an analysis published Thursday, investor Ned Davis notes that the stock market does better than average when unemployment spikes. Davis’ research shows that a jobless rate over 6% correlates with the stock market rising 13.7% per annum.

“How can this be?” Davis wrote. “It defies logic. My explanation would be that this news is widely followed, and the market tends to look ahead. So it is probably priced in.”

It’s also probably in large part because of the central bank’s punchbowl, Davis added. Very high unemployment “can send the Fed into overdrive in terms of making money cheaper and more easily available… When the Fed helps investment grade bond yields plunge, it has been a good buy signal for stocks.”

Related:American businesses are tapping their credit lines at the fastest pace ever

Nicholas Colas, co-founder of investment research shop DataTrek Research, also had some thoughts on the link between the real economy and markets, in an analysis released Friday. “The issuance of money sits at the intersection of public trust and government responsibility,” Colas wrote.

“It is tempting to think that the Fed’s actions today means US stock prices will only trend higher from here: When you remove near term bankruptcy risk from every publicly held company regardless of credit rating or near-term financial condition, asset prices should rise,” Colas added. “Markets know that no matter how bad cash flow might be there is a Fed loan backstop waiting in the wings if needed.”

What’s more, he said, “The Fed knows it must keep equity markets stable to rising in order to keep the 40% of Americans who own stocks sufficiently liquid and confident to spark a recovery in consumer spending. This is the classic wealth effect, something the Federal Reserve understands well.”

It’s worth pointing out that if 40% of Americans own stocks, 60% do not. And not only are those people not sparking a trickle-down recovery, they may be just trying to keep food on the table.

See:Individual investors have $1.5 trillion of cash on the sidelines, J.P. Morgan says. What next?

Previous:Second Potential COVID-19 Vaccine, Backed By Bill Gates, Enters Human Testing
Next: Stocks will revisit their coronavirus crash low, and here’s when to expect it