The past 18 months have seen a significant bounce back for shares of Chinese search juggernaut Baidu (NASDAQ: BIDU  ) . As we’ve now moved past the half-way mark for 2014, Baidu stock has outperformed the broad market as well as its closest competition, global search behemoth Google (NASDAQ: GOOGL  ) (NASDAQ: GOOG  ) , so far this year. 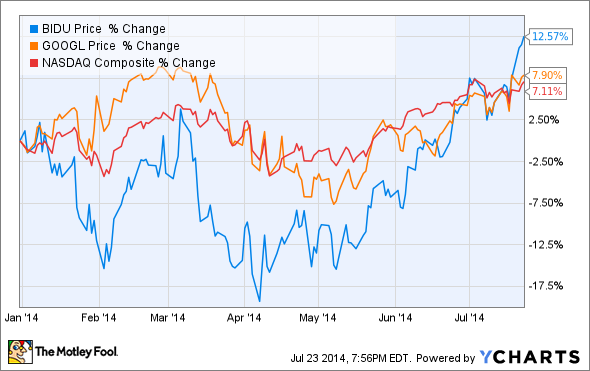 Google recently reported its Q2 earnings, which contained some interesting potential implications for Baidu, which reports on July 24th as well.

Baidu earnings: The mobile wildcard
For those that have followed either Baidu or Google for some time now, mobile has been by far the most significant change agent for either companies’ business models in recent years.

Google, once again, saw its own number of total search ads, as measured by paid clicks, balloon in its own earnings. However, as search ads tend to be significantly less profitable on mobile devices (especially smartphones), the increase in mobile ads have had a frustratingly erosive effect on either company’s per-ad revenue.

Analysts appear to be expecting more of the same as far as this key theme goes in Baidu’s upcoming report, modeling for significant sales that only partially trickle down to Baidu’s bottom line. So should investors be worried about Baidu or Google? In the video below, tech and telecom specialist, Andrew Tonner, argues that despite these genuine short-term headwinds, that Google and Baidu are two of the best positioned stocks in all of tech to thrive over the long-term.