Many people who follow the electric vehicle (EV) sector have been waiting to see if Lucid Group (NASDAQ:LCID), formerly Lucid Motors, will emerge as the first direct challenger to market leader Tesla (NASDAQ:TSLA). There are several reasons to make that comparison. One is that Lucid CEO Peter Rawlinson is a former Tesla employee, and he was the chief engineer in the design of Tesla’s Model S sedan. Another is that Lucid is initially targeting the luxury sedan EV market, and claims to have a much superior battery range than Tesla’s Model S. But with a market cap of more than $700 billion, Tesla is valued by investors as much more than just an EV maker. Perhaps a more appropriate comparison for investors is to look at Lucid versus a manufacturer closer in valuation and level of development: Chinese EV company Nio (NYSE:NIO). Let’s compare the two companies and their stocks. 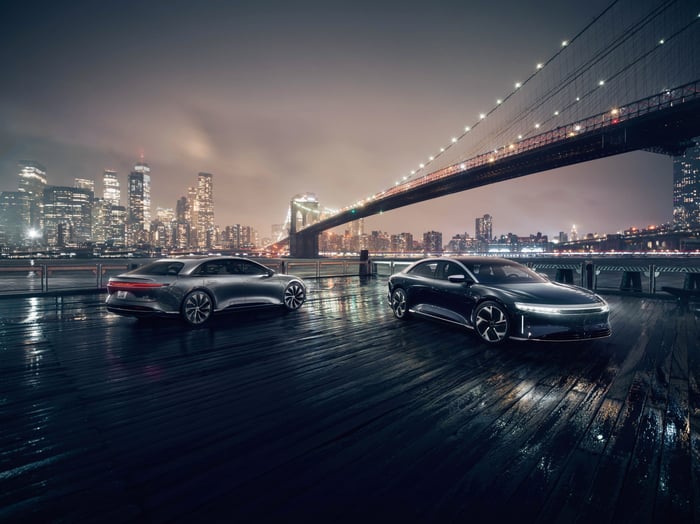 It might not be surprising that Nio and Lucid are approaching their markets with differences in strategy. Nio’s home market of China is the largest automotive market in the world. And the government has been pushing to electrify it more and more. Nio has plenty of room to grow after delivering about 44,000 of its SUVs in 2020, and more than 71,000 in the trailing 12 months (TTM) through July 2021.

Nio doesn’t actually manufacture its own vehicles. Its three SUV models are produced through an agreement with major state-owned automaker Jianghuai Automobile Group (JAC). The unpredictability of the Chinese Communist Party brings potential risks for investors, but the government’s intentions seem to be aligned with growing the EV market. And Nio just announced a renewal of the agreement with JAC that will carry through May 2024 and effectively double manufacturing capacity to 240,000 vehicles per year.

Lucid will be initially focused on the U.S. market. And rather than mid-range SUVs, the first vehicle Lucid will sell will be its premium Dream Edition Air luxury sedan. Reservations are fully booked for the limited-production edition, which costs more than $160,000 even after potential U.S. tax credits. Lucid will then begin offering its other Air models, including one that would cost less than $70,000 after tax credits. 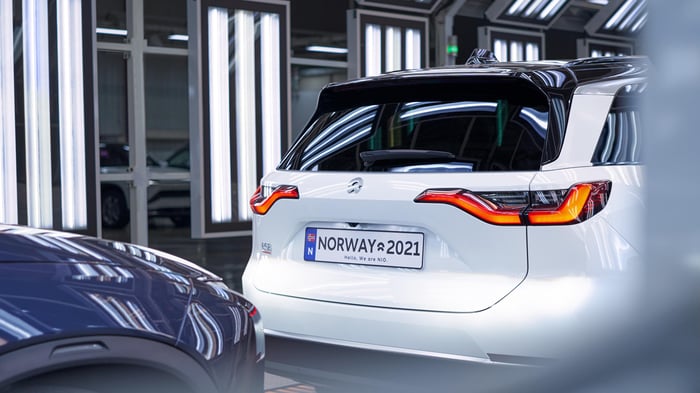 But some similarities, too

Nio, though, has also announced that it will launch its own luxury sedan, the ET7, which is due to begin production in early 2022. And similarly, Lucid has plans for a long-range luxury SUV, the Gravity, which it plans to launch in 2023 following more than a year of sales of its sedan models. Another similarity is that both companies plan to expand overseas. In July 2021, Nio shipped the first load of its flagship ES8 SUVs to Norway for its initial move into the European market. It plans to create a full ecosystem in the country, including its unique battery swap network, where customers can quickly obtain fully charged batteries without waiting for the recharging process. Lucid’s plans also include products beyond its EVs. It has been working on an energy storage system that the company says will leverage its battery technology and management systems to be used for residential, commercial, and utility-scale energy storage needs. And Lucid already has aspirations for expansion overseas as well.

It plans to have showrooms in European and Middle Eastern markets starting as early as the first half of 2022. Saudi Arabia’s sovereign wealth fund invested more than $1 billion in Lucid in 2018, helping to fund the company’s Arizona factory. There are also plans to build a factory in Saudi Arabia, according to a Bloomberg report earlier this year.

Like Tesla, both Nio and Lucid aim to be more than just EV companies. Lucid is trying to immediately leverage its battery technology in its initial offerings of the Air Dream Edition. With a promised range of up to 517 miles on a single charge, the Lucid Air battery system would be more efficient than the Tesla Model S, which has a 412-mile range.

The company’s high-end Dream Editions come in two versions: Performance and Range, delivering horsepower of 1,111 and 933, respectively. And in a real-world driving test from Los Angeles to San Francisco, Lucid said, its Range version was able to provide 517 miles of capacity, while the Performance vehicle provided a 475-mile range.

For investors, both stocks include a myriad of risks. Nio is quickly growing its sales, appears to be approaching profitability, and has plans to expand capacity. That would seem to make the company a lower risk as an already-established business. But Nio is valued at a market cap of $62 billion, compared to Lucid’s valuation of $33.5 billion.

Based on 2020 sales, Nio’s American depositary shares trade at a lofty price-to-sales ratio (P/S) of about 25. But investors should also consider its rapid growth. Total revenue in the first half of 2021 more than tripled versus the same period in 2020. Demand is clearly there.

Investors have driven up Lucid’s valuation even before the company reports any revenue. But once shipments begin, by the end of 2021, investors will be able to start looking at a P/S ratio next year. Its current valuation is likely also supported by the thinking that it could be the right EV company to challenge Tesla in the U.S. Lucid already has reservations that would approach $1 billion in sales if customers follow through with purchases.

It would be premature to book those sales at this point, as several things could affect the start of production or customer interest. At this point, Lucid is also very richly valued. But it has much potential if it successfully manages production and quality.

For investors looking at growing EV makers, both Nio and Lucid should be considered aggressive and speculative stocks. But with the appropriate allocations, both offer plenty of potential and a diverse market geographically. Owning some of both might be a good way to spread the risks and diversify in the EV sector.

Before you consider NIO Inc., you’ll want to hear this.

Our award-winning analyst team just revealed what they believe are the 10 best stocks for investors to buy right now… and NIO Inc. wasn’t one of them.

The online investing service they’ve run for nearly two decades, Motley Fool Stock Advisor, has beaten the stock market by over 4X.* And right now, they think there are 10 stocks that are better buys.