San Francisco (CNN Business)The recent rash of vaping-related illnesses and deaths could represent a crisis for the legal cannabis industry, which relies on vaping for an estimated quarter of its business in some states. 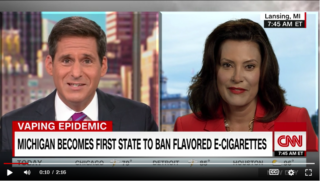 But, some people in the industry believe, the problem could also represent an opportunity, to both help people and push toward wider legalization in the United States.
On Wednesday, the National Cannabis Industry Association (NCIA) put out a call to Congress: To deal with vaping-related illnesses, legalize cannabis and regulate us.
Cannabis’ status as a federally illegal substance fuels illicit products, hinders research and limits the ability to develop consistent regulations, the head of the cannabis trade association said Wednesday.
“These unfortunate illnesses and deaths are yet another terrible, and largely avoidable, consequence of failed prohibition policies,” Aaron Smith, the NCIA’s executive director, said in a statement.
A sixth person died from vaping-related lung disease. Here’s what you need to know
Federal and state health officials are scrambling to identify the causes of a multi-state outbreak of pulmonary diseases associated with recent use of e-cigarettes and vaping devices. More than 450 people have been sickened and six people have died, according to the US Centers for Disease Control and Prevention.
No businesses or products have been implicated in the outbreak, but some of the products in question have contained cannabis compounds, notably the psychoactive THC, according to the CDC. Suspicion has fallen on illicit or bootleg THC vaping devices as well as additives, and many of the illnesses and deaths reported have been in states that don’t have regulated recreational cannabis programs.
“We are still in a bathtub-gin era with cannabis where there are a whole lot of people without access [to legal cannabis] and people who are not in the regulated market take advantage of this, and people who are new to the market take advantage of this,” said AC Braddock, CEO of Seattle-based Eden Labs, a 25-year-old manufacturer of equipment that extracts plant oils.
Even if the issue is rooted in the black market, the situation could become a serious threat for the legal cannabis industry as more authorities warn against vaping or move to crack down on it. Through July, vape products accounted for 25% of licensed cannabis sales in Arizona, California, Colorado, Nevada and Oregon, according to cannabis research firm BDS Analytics.
“This is, I think, a wake-up call to the industry and also to consumers about the fact that a very safe product can be rendered unsafe if the people processing it are not being held to account,” said Taylor West, former deputy director of the NCIA who is a founding partner of strategic communications firm Heart + Mind Media.
But it’s not entirely clear that THC products being sold by legal businesses are blameless.
In Oregon, one of the deaths involved a person who had recently purchased a vape product at a licensed dispensary, said Delia Hernandez, a spokesperson for the Oregon Health Authority. The investigation is ongoing and on Wednesday health officials asked stores to review their inventory.
Some industry members aren’t waiting to take action. At Urban Farmacy dispensary in Portland, Oregon, owner Margo Amala said she pulled products with any additives or unknown ingredients.
“We’ve definitely scrutinized all the products on our shelves,” she said, adding she’s considering pulling more.
Jonathan P. Caulkins, a drug policy researcher and professor at Carnegie Mellon University, said this outbreak hopefully could spur the US Food and Drug Administration to regulate cannabis and its derivatives as drugs and vape pens as drug delivery devices.
A goal of regulation could be to help ensure products have consistent quality and properties, he said.
“I don’t really see this as reversing legalization overall,” he said. “I hope that this nudges us a little bit toward a more careful legalization. The amount of naivete the country has had about legalization is completely distressing.”

Previous:047: Victor Ricciardi on The Psychology of Financial Planning and Investing
Next: Surgeon General’s Advisory Highlights Need for Further Cannabis Regulation, Not Criminalization