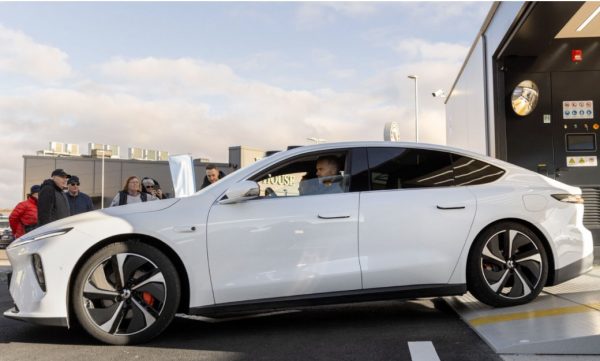 Electric vehicle startup Nio is accelerating its expansion in Europe. The premium EV maker just launched its first power-swapping station in Varberg, Sweden, the company said in a LinkedIn post.

When it comes to charging, Nio differentiates itself from its rivals by offering swappable batteries, which are upgradable and charge a monthly subscription fee, on top of the traditional plug-and-charge model. In its home market China, Nio’s battery-swapping systems are popping up around trendy malls and office highrises, and it’s taken the novel concept to a noticeable scale. As of November 6, the company had installed 1,200 of these swapping stations across China. The idea is to enable EV charging as fast as refueling a petrol car.

The company said on its November earnings call that it planned to install 20 power-swapping stations across Europe by the end of 2022 and increase the tally to 100 by next year.

Nio began expanding in Europe last year, starting in Norway, which has been aggressive in pushing EV adaption. Xpeng, Nio’s Chinese rival, also picked Norway as the first stop in its European expansion.

Nio is setting itself up for an uphill battle in a crowded auto market in Europe, but it seems determined in growing its presence on the continent. Headed by the charismatic, English-speaking serial entrepreneur William Li, Nio hosted a splashy launch event in Berlin, which marked its official market entry in Germany, the Netherlands, Denmark and Sweden.

The company began by offering lease-only for its models in all European countries except Norway but shortly added the option for customers to purchase the vehicles after initial market feedback.

It’s also ramping up its operational footprint in Europe, with an R&D center in Berlin to work on “localized development and deployment of digital cockpits and to continuously improve the intelligent digital experience of local users,” said Li on the earnings call. The carmaker now operates “Nio Houses“, which are essentially product showrooms and customer clubs, in 10 major European cities.

Possibly in a move to diversify supply chains from China, Nio recently began manufacturing products, including its power-swapping facilities, out of Hungary and shipped its first Hungary-made swapping station to Germany in September.