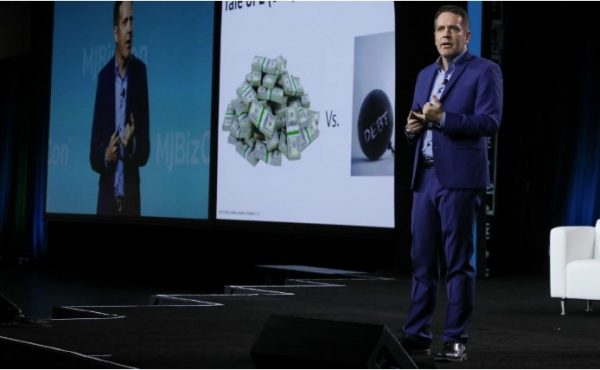 LAS VEGAS – Meaningful action in both marijuana banking reform and the federal scheduling of cannabis are both on the table in 2023, according to MJBiz CEO Chris Walsh.

Walsh shared his predictions for the coming year on the Main Stage at MJBizCon on Wednesday:

1. There will be tangible consolidation in some key U.S. markets.

The marijuana industries in California and Michigan will likely consolidate next year, according to Walsh.

“There’s going to be a culling,” he said of the cluttered, competitive markets.

But that also hinges on federal marijuana reform not happening, which, if it did, could change the game “significantly” by opening up new opportunities for licensed companies in those states.

2. New York’s illicit market will be tough to contain after adult-use marijuana is launched.

A recreational market is still scheduled to launch in New York sometime this year, but in the meantime, the illicit market has had plenty of time to establish a strong presence – and it could be difficult to convince shoppers to buy from legal sources.

“I’ve been there four times this year – weed is everywhere,” Walsh said, referring to the high numbers of cannabis-selling vans set up in Times Square, bodegas and delivery options.

There’s no shortage of marijuana in New York, but little of it is part of the forthcoming adult-use program. (Some Native American adult-use businesses are already operating legally on tribal land.)

“It’s going to be hard to clamp down on that,” he said.

3. Canadian cannabis inventory will peak in 2023 and then start falling in 2024.

Canada’s cannabis market has been vastly oversupplied for years, and inventories will peak next year before beginning to fall in 2024.

Crediting MJBizDaily International Editor Matt Lamers – who wrote about the 425 million grams of cannabis that licensed producers destroyed in 2021 – for the rightsizing prediction, Walsh said that future inventory decline will benefit the industry.

4. Resistance to federal marijuana legalization in red states will grow.

“It doesn’t mean it will be successful, but we’re seeing more organized opposition (to marijuana legalization) now,” Walsh said.

That resistance to U.S. reform will make it more difficult for state and federal legalization efforts.

The states looking most likely to pass adult-use marijuana reform in 2023 are Minnesota, Pennsylvania and Ohio, Walsh said.

6. Cannabis banking reform will pass, and there will be meaningful action on the descheduling or rescheduling of marijuana.

Walsh acknowledged that it’s a bold prediction, but he said the Safe and Fair Enforcement (SAFE) Banking Act or some kind of federal reform will pass in 2023.

“Not a complete move necessarily,” he said, “but I think we’ll see something meaningful happen.”

There’s some possibility that Congress could pass SAFE Banking in the current lame-duck session.

“I’m looking for optimism,” he said.

“And if it doesn’t pass? Whatever, we’re an industry that’s going to get past anything.”

Kate Robertson can be reached at kate.robertson@mjbizdaily.com.