Draft proposals for legal cannabis in Germany, potentially the biggest weed market in the world, would allow 20 grams, put a cap on THC levels and restrict advertising. Critics say it could backfire. 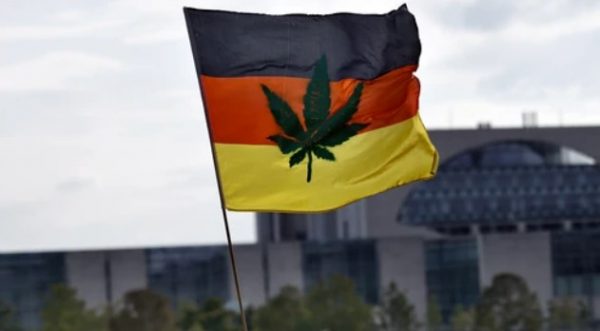 Germany could allow people to buy and possess enough weed to make about 40 spliffs according to leaked plans for its legalised cannabis market.

Drawn up by Germany’s Health Minister Karl Lauterbach, the initial plans, leaked to German news agency RND, would put a cap on THC content at 15 percent for people aged over 21 and 10 percent for those aged 18-21.

People would be allowed to possess a maximum of 20 grams (0.7 ounces). Under-18s caught in possession of cannabis would not be criminalised. There would be an allowance for the home-growing of up to two plants.

The draft document – which has already drawn criticism from legalisation experts and Germany’s main weed lobby group – suggests a total ban on advertising, cigarette style non-branded packaging and sales from licensed shops and pharmacies. All cannabis sold would be produced in Germany. It also appears unlikely edibles and extracts will be legalised and there was no mention of setting up a cannabis clubs system, co-operatives where people team-up to grow and sell weed.

Last November Germany’s new coalition government announced it wanted to legalise the sale of cannabis for recreational use in order to “control quality, prevent trade of contaminated substances, and guarantee the protection of minors”. Germany has a problem with some cannabis vapes and herbal weed being laced with dangerous synthetic cannabinoids.

The law change, slated for 2024, would turn Germany into Europe’s biggest single cannabis market, and depending on whether Mexico legalises, it could become the biggest in the world.

According to people familiar with cannabis markets and the legalisation of the drug, the proposals as they stand, particularly the caps on THC, would drive many weed users who prefer stronger weed back to the black market.

Fabian Steinmetz, a senior toxicologist and member of the Schildower Kreis expert drug network, expressed doubt that the plans as they are would “not reduce the black market significantly”.

“For me it’s important that we get a regulatory framework which speaks to the majority of people affected by prohibition, including ‘heavy users’. He said that if Germany “implemented a shitty legalisation”, it could postpone legalisation in other countries across Europe.

Steinmetz said the proposals would have to go through three readings in parliament, and potentially watered down or compromised, before becoming law.

Lily Temperton, head of analysis at Hanway Associates, a cannabis sector consultancy, said the plans appeared to have walked away from regulating healthier, non-smokable weed products.

“Capping legal products below the strength that most consumers are accustomed to alienates heavy cannabis consumers the most, who represent the vast majority of sales,” said “The cap would restrict the potential to innovate in higher potency formats like extracts, vape carts and edibles that provide an alternative to combustion. We hope they are ironed out once legislation begins.

“It also remains to be seen whether German regulators will make any considerations for the social impact of legalisation, and the potential to use reform to address long-standing racial and class disparities in enforcement and prohibition.”

In a statement, Georg Wurth, managing director of the German Cannabis Association (DHV) agreed that a THC cap of 15 percent “excludes a large part of the currently existing market for [weed]”. He said a THC limit of 10 percent for 18-21 year olds “completely misses the reality” and that the proposed possession limit of 20 grams is not very practical for people in rural areas who may need to stock up. “The bottom line is that these key points will not succeed in getting consumers off the black market and into the stores. Thus, the desired consumer and health protection will also fail.”

So far cannabis has been legalised in Uruguay, Canada, Malta and in 19 US states. Plans for legal weed in Mexico have stalled. In Canada, which legalised weed four years ago, there is no upper limit on the amount of THC in herbal weed, although there is a limit on edibles and extracts.

Temperton said there are “extensive case studies” on which German regulators can base their recommendations on. For example, in 2021, responding to a suggestion that a THC cap be reduced from 30 to 15 percent, the State of Vermont’s Cannabis Control Board said: “High THC cannabis makes up the majority of products sold in the medical cannabis and illicit marketplaces. Lowering the THC cap to 15% would merely perpetuate the unregulated market and force consumers to purchase untested, potentially contaminated products.”

Steve Rolles, senior policy analyst for Transform Drug Policy Foundation, which advises governments on how to regulate weed, said while the 20 gram maximum was a “a bit low”, the cap on THC was reasonable.

“It all looks pretty sensible to me and in line with the public health messaging we have been hearing from officials before now. The Germans are very conscious of the optics and international scrutiny, they want to be seen to be responsible actors. I think everyone expected the German legal market would have a different look to the more commercial North American models, and the outlined proposals are certainly quite conservative by comparison.

“A 15 percent THC limit will actually not trouble most consumers – and for those who want stronger, homegrown will remain an option. More potent products would also remain available for medical use.”