Stocks plunge 1% amid overseas decline; Dow negative for the year

The major averages had their worst day since March 25. The Dow Jones industrial average dipped more than 350 points before coming off lows but remaining negative for the year, with American Express (AXP) and 3M (MMM) among the greatest decliners. (Tweet This)

Meyer said the negative reaction in equities and futures was more of an “aftershock.” “It should really not affect us at all. The Chinese market has been an unusual source of strength,” he said. “In a very quiet market on a Friday it doesn’t take much to move the market.”

Analysts also noted follow-through from Federal Reserve Vice Chair Stanley Fischer statements on Thursday that a rate hike would come unless economic data showed a continuation of the first-quarter’s weakness.

“Given his position, the last thing he wants to do is come out and confuse markets,” said Prudential Financial’s Quincy Krosby, noting a similar tone with Fed Chair’s Janet Yellen’s March comments that a rate hike would come gradually. “Right now that’s where they are and the market doesn’t like it.”

“We know on Monday China has potential being down a lot,” said Peter Boockvar, chief market analyst at The Lindsey Group. “Greece is an issue again.”

“I think that combination of a stronger euro and Greek chatter has profit-taking in the euro zone,” said Art Hogan, chief market strategist at Wunderlich Securities.

The euro traded just below $1.08, near highs for the week.

Read More Grexit fears in Europe cause flight to safety

Boockvar noted that the selloff in U.S. index futures and European equities came within an hour after Chinese stock futures fell around 5 a.m. ET. U.S. stocks are also near levels of resistance at the high end of the recent trading range of 2,040 and 2,120 on the S&P 500, he said.

“The S&P futures are lower this morning on the back of weakness overseas,” BTIG’s Chief Technical Strategist Katie Stockton said in a note. “The pullback follows new all-time highs in small- and mid-cap indices, although the SPX has yet to follow suit. We think a brief pause will allow for a breakout, noting the DeMark indicators support about four days of consolidation. We think a bullish bias is appropriate with breakouts far outnumbering breakdowns among individual stocks.”

“If the market closes down today, the market will have failed to break out of its current consolidation range,” Lance Roberts, general partner at STA Wealth Management, said in a note. “This suggests more sloppiness going into next week.”

The data “doesn’t impact us in the market today,” said Peter Cardillo, chief market economist at Rockwell Global Capital. He advised investors to be “cautious and prudent” ahead of a likely pullback, with Friday’s earnings in the industrials sector adding to some weakness in the market. 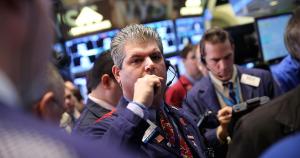 General Electric (GE) reported adjusted quarter profit of 31 cents per share, 1 cent above estimates. Revenue was below forecasts, due in part to a $950 million negative impact from currency effects.

Honeywell (HON) beat estimates by 2 cents with quarterly profit of $1.41 per share, though revenue fell slightly below analyst forecasts. The company gave a cautious sales outlook, but said expanding profit margins should boost the bottom line.

After the bell on Thursday, American Express reported earnings above estimates. However, revenue missed expectations due to a strong dollar and the end of several co-branding relationships.

“If we can just get out of earnings flat, I think that will be a big (head)wind,” said John Canally, investment strategist and economist at LPL Financial. After a financials-heavy week of reports, investors will get a better sense of the economic environment with a broad swath of earnings, he said.

Futures held lower but above morning lows after the consumer price index showed an increase of 0.2 percent in March, below expectations of 0.3 percent.

However, the figure marked the second-straight month of gains and matched February’s 0.2 percent gain. Core CPI, excluding food and energy, came in slightly above expectations at 0.2 percent, the same level as in February.

“Bottom line, the decline in CPI is all energy and the core rate has been running between 1.6 to 2 percent since the middle of 2012 (when it was running above 2 percent) driven by services inflation led by rents,” Boockvar said in a note. “The deflation argument I believe is nonsense and if energy prices just stop going down, then we’ve seen the bottom in the inflation stats.”

The CBOE Volatility Index (VIX), widely considered the best gauge of fear in the market, traded near 15.

For every six decliners one advanced on the New York Stock Exchange, with an exchange volume of 509 million and a composite volume of 2.3 billion in afternoon trade.

“All day long this has been a “grind” trade on light volume,” said Kevin Giddis, head of fixed income capital markets at Raymond James. “But, once oil prices started to fall, the trade turned from a short covering trade to a defensive buying trade and yields fell 3 basis points in the move. Greece and equities have been the story since the morning numbers came out. Foreign interest in U.S. Treasurys remains strong.”

Trading was affected in Europe and Asia Friday morning by an outage on Bloomberg’s trading terminal , resulting in a treasury auction in the U.K. being postponed.. By 10:58 a.m. ET, the company said that service was fully restored. (Disclosure: Bloomberg is a competitor of CNBC.)

-Reuters and CNBC’s Patti Domm and Peter Schacknow contributed to this market report.