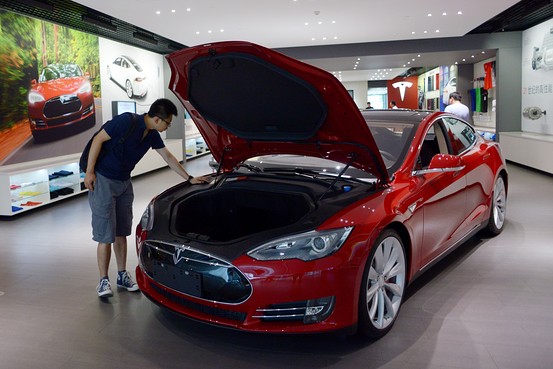 Shares of Tesla Motors Inc.TSLA -1.63% have rallied to yet another series of fresh records, but options traders aren’t betting on continued big moves in the day-trader favorite.

That rally ended Monday. Shares opened higher but fell throughout the day, closing down 0.8% to $259.94. Tesla shares have gained about 16% this month and have surged about 73% in 2014 through Monday’s close.

However, Tesla’s 30-day implied volatility on Monday was near its lowest level since March 2013, according to Livevol Pro data. Implied volatility is a gauge of future volatility that is derived from options prices, and the decline in the measure indicates options traders aren’t betting on as sharp a move in the underlying stock in the next 30 days as they have over the past few months.

The two most active options on Monday were weekly call options that would grant the holder the right to buy Tesla stock if shares rose above $265 and $270, respectively, through the end of the week.

The $265 and $270 call options were likely being unloaded Monday by traders who were unwinding earlier bets that the stock would reach those levels by Friday, said Andrew Wilkinson, chief market analyst at Interactive Brokers.

“They just don’t see the stock leaping that far that quickly,” he said.

Tesla shares have a history of big swings. Tesla’s shares jumped about 83% between January 13, which marked the 2014 low, and March 4, nearly doubling in less than two months.

Previous:Today’s Momo Momentum Stock Is Netflix (NFLX)
Next: 12 Stocks Even Better Than Google