The stoned age: Nearly HALF of Americans aged 19-30 now use marijuana, report finds

Nearly half of young adults in the US use marijuana in some capacity, a federally-funded study suggests.

Just over 42 per cent of Americans 19 to 30 reported  either smoking or consuming cannabis in the last year — the biggest proportion since records began in 1988.

Around three in 10 said they had used the drug in the last month, and one in 10 admitted to being a daily user.

The startling survey results came from the annual Monitoring the Future report, carried out by the University of Michigan.

The report showed use of hallucinogens — such as LSD and magic mushrooms — have also spiked in recent years.

Dr Nora Volkow, director of the National Institute on Drug Abuse, which funded the study, said we ‘need to know more about the health effects’ of these drugs.

A growing body of research has shown that chronic marijuana use can alter brain development in young adults and even raise the risk of mental health issues and even a lower IQ.

A total of 19 states have now legalized cannabis for recreational use, which many critics believe has normalized the drug. 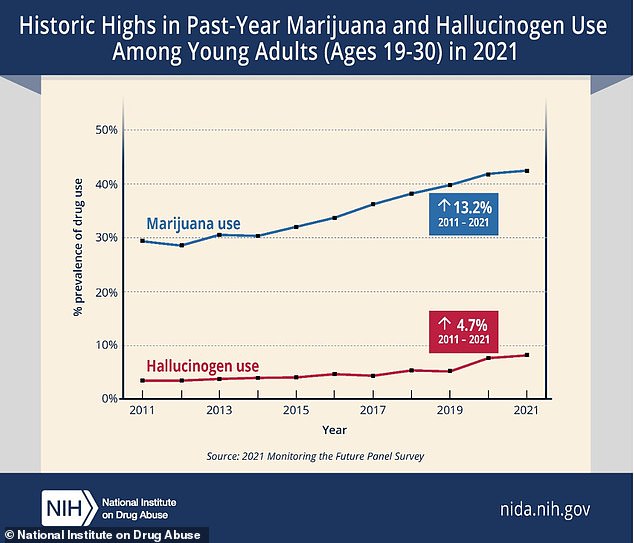 Nearly half of young adults in the US use marijuana in some capacity, a federally-funded study suggests. Just over 42 per cent of Americans 19 to 30 reported either smoking or consuming cannabis in the last year — the biggest proportion since records began in 1988

The above shows cannabis use across American states. Some 19 have legalized it for recreational use, while nearly all now allow it to be used for medicinal purposes

The rate of young people who vaped marijuana more than doubled since 2017, from 6 per cent to more than 12 per cent.

Vaping is appealing to marijuana users because it is a more discreet alternative to smoking, which produces smoke as well as odor.

Marijuana use in the US

Vapes, however, produce vapor, not smoke, and little to no smell. Users can also find varieties of THC vaping liquid in fruity flavors, further boosting their appeal among young people.

The uptick in marijuana use over the past two years coincided with the onset of the global Covid pandemic, which prompted strict lockdown restrictions in spring 2020.

Lockdowns spurred economic contractions in major economies including the US, leading to financial troubles for millions of Americans.

Another survey of 2,500 consumers conducted by Cowen & Co. in March 2020 found that 12.8 per cent had used marijuana within the past month compared to the 2019 average of less than 13 per cent.

Marijuana use over the past decade has risen alongside the changing legal landscape.

California was the first state to legalize medical cannabis in 1996. Since then, medical marijuana has been legalized in some capacity in 39 states and DC.

Already, DC and 19 other states have legalized recreational marijuana though it remains federally illegal, classified in the same category that also includes heroin and ecstasy

Recreational marijuana legalization is on the ballot in five states this November: Maryland, South Dakota, Missouri, Arkansas, and North Dakota.

Most states that have legalized recreational cannabis have done so through ballot measure, the same tactic that progressives are eyeing as a means to sure up abortion access in the absence of a nationwide guarantee.