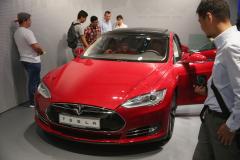 Both companies have expressed admiration for each other. Toyota has also been purchasing some electric car batteries from California-based Tesla, but that deal is scheduled to end later this year.

“If you look at maybe two or three years from now, I would not be surprised if there is a significant deal with Toyota and Tesla,” Musk reportedly told a news conference in Tokyo.

While Musk said any future deal would be on a larger scale than the existing agreement between the two companies, he wouldn’t go into details and added there were no specific plans.

A Toyota spokesman, according to Reuters, also declined comment on Musk’s remarks. Some industry analysts believe the Toyota/Telsa relationship is far from over.

“Although Tesla and Toyota are reaching the end of their current battery supply arrangement, it is no surprise that the door remains open for them to partner again in the future,” Alec Gutierrez, senior analyst forKelley Blue Book, told Benzinga.

Gutierrez said Toyota has partnered with Tesla in the past. He pointed to Tesla’s successful takeover of Toyota’s Nummi production facility in California, the plant where Tesla makes its groundbreaking Model S sedan.

“So it’s not as though either company would be averse to partnering up once again,” Gutierrez said.

He also notes both Toyota, as the world’s leading automaker, and Tesla, with its revolutionary electric cars, are industry leaders at the top of their game, and companies that would surely consider more opportunities to join forces.

“Of particular interest will be the impact on battery prices once Tesla’s new gigafactory is fully operational,” he adds. “This seems like an area where Tesla and Toyota might find a reason to work more closely together once again in the future.”