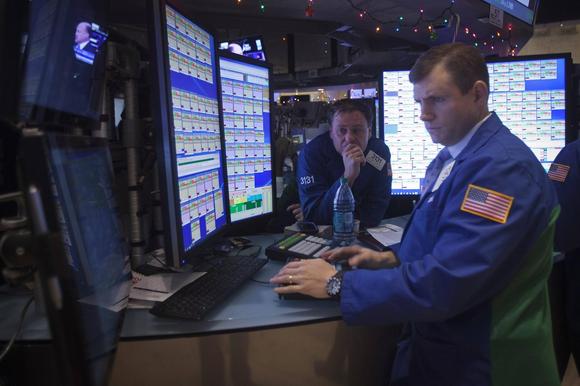 Traders work on the floor of the New York Stock Exchange in New York December 22, 2014.

(Reuters) – U.S. stocks edged higher in a thinly-traded session on Monday as the market’s recent upward bias continued and put the Dow on track for an eighth straight daily advance.

Equities have trended to the upside of late, with the S&P 500 up 5.9 percent over the past seven sessions, ending at its 52nd record close of the year on Friday. The Dow’s seven-session streak is its longest since March 2013.

The speed and scale of the rally could limit upside, especially in the final trading week of the year, when many market participants are out on holiday and there are few catalysts. Volume is expected to remain light, which could leave the market more susceptible to big swings.

“Everything is a go right now, but there’s no reason to expect we’ll start seeing big moves this week. I don’t see anything … that could derail or upset the market,” said Mark Martiak, senior wealth strategist at Premier Wealth/First Allied Securities in New York.

Energy shares were among the day’s biggest gainers. The S&P energy index .SPNY rose 0.7 percent alongside a rise of 0.6 percent in crude oil CLc1. Oil rose on concerns about disruption to exports from Libya, though it remains sharply lower for the year, having fallen in 12 of the past 13 weeks. [ID:nL3N0UD09X]

“Greece is always worth paying attention to, but it’s a hiccup. I don’t see it as anything that makes a difference in the overall market,” Martiak said.